You might recall the comment from my Solar PV blog post that exporting unused generated energy back to the grid is the biggest annoyance of a Solar owner.

The obvious solution to this is battery storage.  I’d ummed and arghed about it for a while and finally took the plunge last month.

There are quite a few options out there in the market that I explored.

PowerVault, Tesla Powerwall and Moixa all provide the battery and inverter in one nice single box package.  So you need the physical space to be able to place one of these.  Not everyone will have this amount of space available, I certainly didn’t.

The other route you can go down is a separate inverter that you can then couple with modular batteries.  So you can place the two elements separately.

Again, there is choice when it comes to the invterter; Sofar, Lux, Growatt and GivEnergy to name a few.

But when it comes to modular batteries, there is only one name that stands out; Pylontech.

The most common configuration of battery that Pylontech supply are single batteries (model US2000) at 2.4kWh capacity each, which you can then string together to give the capacity you require.

After speaking to people, reading forums and generally hunting around I decided to go for the Lux AC3000 inverter.  I’d heard good things about the actual unit with its 10 year warranty and also the future connectivity options which i’ll touch on shortly. 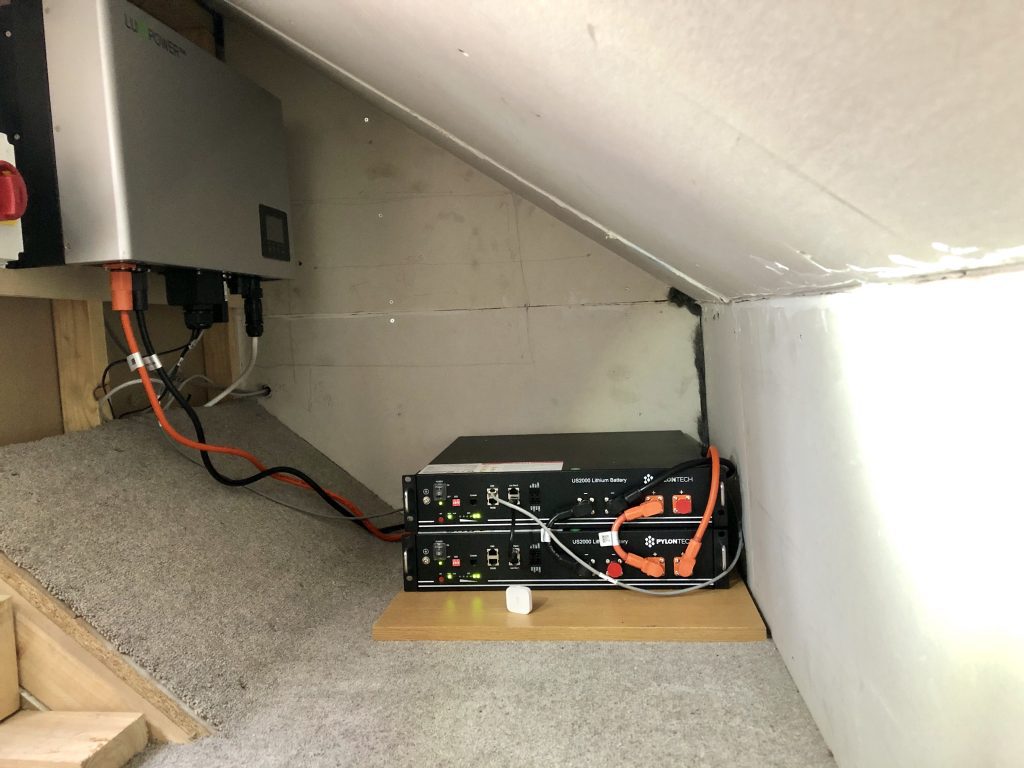 As you can see from the above, the batteries have been installed up in the loft space.  The power cable and CT clamps run down the outside of the house in conduit to the consumer unit.

Who and where from?

I got the Lux inverter and Batteries from Big Green Beard, who are the sole distributor of Lux in the UK.

When you get in touch with them for a quote, ask for Jake and be sure to mention that the energy-stats website sent you.  He should hopefully look after you.

My installation was done by Mark Skelton (@markskelton72 on Twitter). An electrician based out of Wakefield, but willing to travel nationwide.

How much battery to get?

The battery capacity to initially buy was a tricky choice.  Did I go just one (2.4kWh), two (4.8kWh), three (7.2kWh) or even higher?  In the end I decided to dip my toe in with two batteries for a capacity 4.8kWh, of which 90% is usable via the Lux inverter.

The beauty of going with a modular system like the Lux and Pylontech combo is that you can easily add batteries as and when.  It only takes two short cables to add more batteries and is a simple DIY job.

Ideally I’d like to get to 7.2kWh which alongside my Solar should give me the sweetspot between sunset and sunrise.  So using a combination of Solar in the day and batteries at night.

I’ve looked back though my Solar generation and electricity export history.  4.8kWh will likely get me through most of the nights in the Summer months, but its when you get into Spring/Autumn and Winter when the days are shorter then I would need 7.2kWh and maybe even more.  Yes, you could spend a fortune on 9.6kWh and upwards, but for our use case I don’t think we’d make enough use of loads of batteries, not from looking at the figures anyway.  But your usage may vary, so you need to decide what is going to be right for you.

Yes, there are days in winter where we don’t generate much via Solar at all.  But i’d then be looking to the likes of Octopus Energy Agile tariff to fill up with overnight cheap energy and then use the stored electricity through the day, ensuring i’d got enough stored to get me through the 4pm to 7pm pricing peak of Agile.

Some days, even with batteries, you’re going to have to import some electricity!  Unless you buy a 13.5kWh Tesla Powerwall system for about 8 grand!!

Lux provide an online portal from your web browser as well as both iOS and Android apps.  Here’s a screen grab from my portal one sunny afternoon.  The app has an almost identical look and layout. 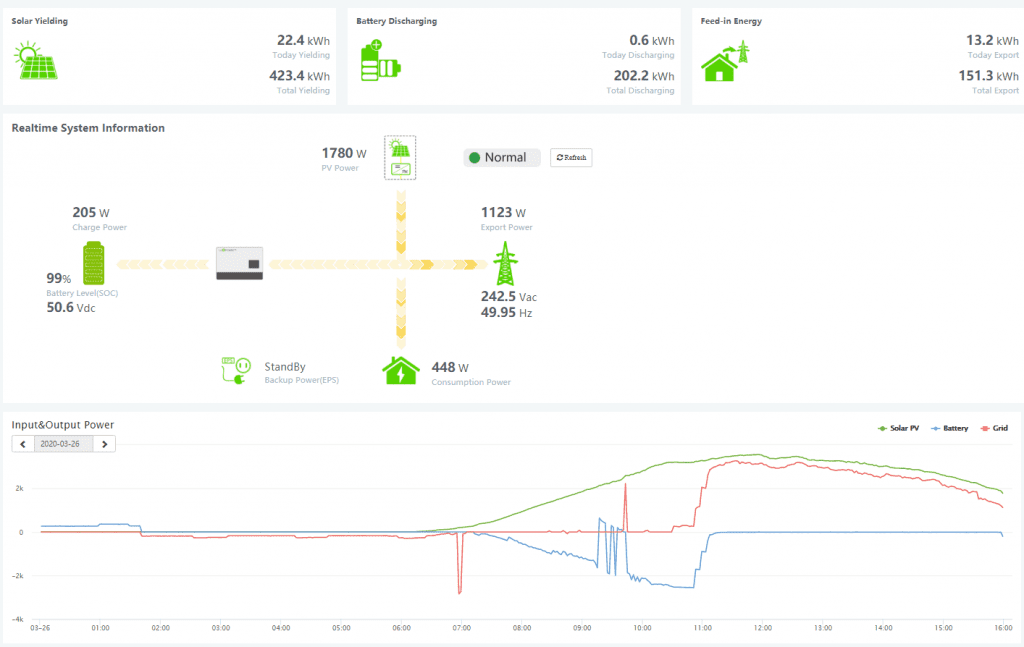 Firstly, the Lux Inverter and Pylontech batteries are virtually silent.  The only noise you can hear is the faint click of a relay switching at various times.  This is a bonus as the loft space where ours is installed is right next to one of the kids bedrooms.

Below is a screen grab from my emoncms.org account.  This is another bunch of monitoring I’ve got going on that i’ll talk about in another blog post at some stage.  Basically, its a clamp based monitoring system based around a Raspberry Pi.  Find out more about the emonPi and emonTX over at https://openenergymonitor.org/

Part of the emoncms software suite is an app that shows your historical energy usage and maps it against Octopus Agile pricing.

As you can see here from a week in early March, I’m filling the battery:

As you can see from the summary at the bottom of the screen grab, by using targeted energy imports alongside our solar, the average unit price of everything I imported that week was just 5.1p per unit. 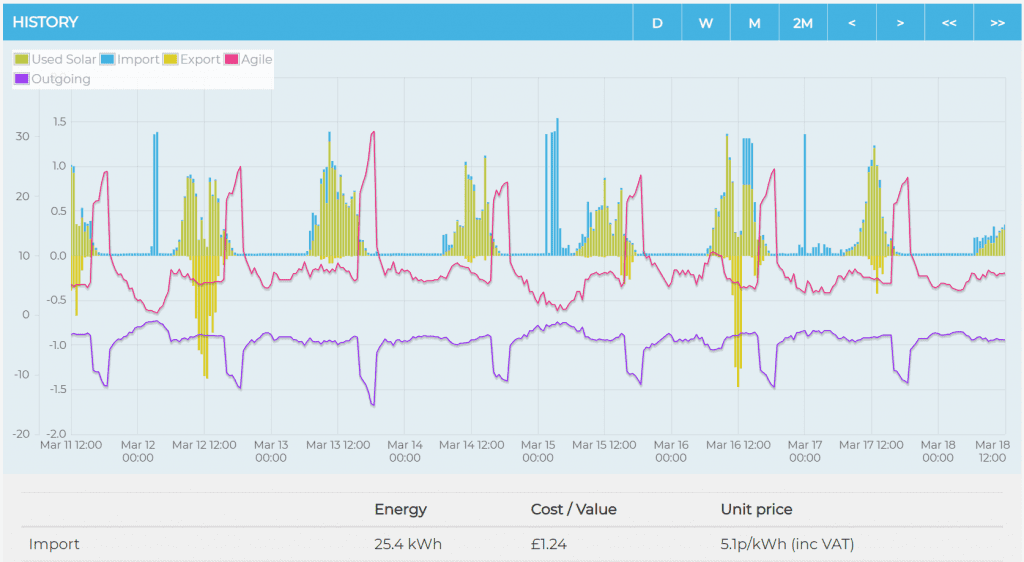 And in this next output below from my PVOutput monitoring you can see the following:

So on that day I only imported less than 2kWh all day.  Which according to emoncms.org was at an average of just 4.7p per unit.

The orange line is the battery percentage full (using the scale on the left).

Limitation of only having two batteries

Because the batteries are modular, the charge and discharge rate depends on how many batteries you have.

Note: apparently if you link 2 x Lux AC3000 inverters together you can get upto 7.2kWh in parallel.

So because I’ve got 2 batteries, I’m limited to 2.4kWh both into the battery and coming back out from the battery.  You can see this clearly below from 10:40am onwards where the solar was generating over 3kWh but I was only able to charge the batteries at just over 2.4kWh (the grey bit).

The same would be true going out.  If you stuck the kettle on alongside another high use item and needed say 3.3kW, you’d only be able to pull 2.4kW from the batteries, the other 900W would need to be imported (or come from Solar)

This is another reason why i’d like to upgrade to 3 batteries.

One of the main reasons I went with the Lux is current and upcoming Octopus Energy API integration.  I think every battery provider needs to be working on this.  Powervault and Moixa are definitely working on this and there are hobbyist Tesla Powerwall integrations out there too.

I’d heard rumours from a couple of sources that Lux are working with Octopus on official API integration.  How quickly that materialises, who knows.  But the fall back is the fantastic Octolux by Chris Elsworth.

Octolux is a collection of scripts that need to run on a linux machine on your home network.  So this could be something as cheap and accessible as a Raspberry Pi Zero W from Pimoroni.  Anything that you can run install Ruby on really.

The scripts talk directly to your Lux inverter as well as the Octopus API and decisions are made to charge / discharge etc based on the rules you set as well as the current Agile pricing.

I’ve been using Octolux for a a while now and I absolutely love it.  Chris has done a tremendous job with this and I heartily recommend it.

It will certainly do for me whilst we wait for any formal API integration from Lux.

Anyone that has considered battery storage has likely looked at the return on their financial investment.  Unfortunately, as prices stand in 2020, you are definitely in this for the long haul as battery storage is no get rich quick scheme.

So as you can see, to get your money back in 10 years you’d need to be saving somewhere around 15p per unit (think Agile peak pricing and higher).  I’ve also not even mentioned the round trip losses of filling and discharging the batteries.  ie you don’t get back all of what you put into the battery.  A small percentage is lost as part of the pushing and pulling.

Don’t have solar?  Well you could still ‘buy cheap’ overnight to fill the batteries and then use during the day.  But then the calculations become even less attractive.

Bottom line, you’re unlikely to choose battery storage to be a money spinner.  But there are other reasons you may want a battery; load shifting, buying greener/off peak energy, at lower co2 intensity times or even trying to go off-grid entirely.

Hell, you might even think stuff the economics, I just want a battery so I can feel good about my green credentials and see more graphs and stats. LOL.

That certainly does remind me of someone!! 🙂

Any questions about the site, any suggestions about future blog topics or comments about any of my other existing blog entries, please let me know via the contact form.